The voltage and current in a complete electrical circuit obey Kirchhof’s voltage and current laws.  These laws simply stated are:  the rises and drops in voltage around any closed circuit (a circuit loop) must sum to zero; and the total current flow into any one junction (connection point) must also sum to zero.  If we wish to interrupt the current in a circuit, we must do so in accordance with these laws.

Although it sounds simple, interrupt the circuit, break the conduction path, or open the switch – it is not.  Forcing a conducting circuit to a steady-state condition of zero current is anything but simple.  Many times, the actual detailed physics of the process of current interruption is obscured by the seeming triviality of the switching action – such as simply flicking off a flashlight.  But consider what actually happens when a flashlight is turned off.

A steady-state direct current (DC) is flowing from the batteries to the bulb as the switch contacts begin to move.  At the last microscopic points of electrical contact, the current density becomes high enough that portions of the metallic surfaces actually melt due to resistive heating; and a liquid metal vapor plasma state continues the electrical conducting path as the contacts physically part.  As the contacts pull further apart to distances of several microns (one micron = 10-6 meters), electrons from the contact into which the current is flowing, the cathode contact, are emitted into the intercontact space region due to thermal emission (they boil off) and field emission (they are ripped from the cathode metal by electrostatic attraction forces).

A portion of these electrons emitted from the cathode collide with air molecules within the contact gap and ionize the molecules. This frees still more electrons, which in turn ionize still more air molecules.  This self-perpetuating action is an electrical breakdown phenomenon commonly referred to as an arc.  It is the arc which enables the switch to open the circuit.  The arc forms just as the contacts part, and continues to conduct the circuit current as the contacts move further and further apart.

The voltage drop across the arc – which is proportional to the arc length and inversely proportional to the arc cross-sectional size – is in series with the voltages in the circuit loop which contains the switch.  The arc voltage grows as the arc is lengthened by the physical movement of the contacts, and the arc cross-section is diminished as the arc is cooled by contact with un-ionized air molecules.

The arc voltage in low voltage DC circuits grows at such a rate that it soon exceeds, or at least matches, the source voltage in the circuit (in a flashlight the initial arc voltage exceeds the battery voltage).  When this occurs, the circuit current is driven to zero in short order.  All circuits contain a small but finite inductance, so the current cannot be driven to zero instantaneously.  When the current does reach zero, no further arc ionization takes place, and the arc is cooled even more rapidly, since it has no energy input.  If it is cooled momentarily to such a state that it is no longer a conducting medium, then the interruption process is complete and the circuit has been opened.  It is important to remember that it is the arc that forces the current to zero.  The opening of the switch forms the arc, but it is the arc which enables the circuit to be interrupted.

A switch or circuit interruption device which is intended to open alternating current (AC) circuits has a somewhat easier chore than its DC counterpart.  In AC circuits, there is no need to force a current-zero condition.  Since the current alternates about zero already, there is a natural current-zero twice in each AC cycle.  Any arc which forms in an AC switching device does not have to be stretched and cooled to the extent that the arc voltage exceeds the magnitude of the circuit source voltage.   However, this can be done if one wishes to limit the magnitude of an overcurrent by driving it down to an unnatural current-zero. 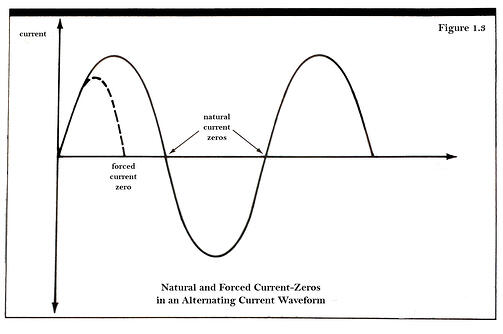