Before an electrical circuit interruption process is initiated – that is, when the contacts of an interrupting device start to open or the injection of mobile carriers into a semiconductor switch is restricted – the interrupting device must first make a trip/no-trip decision.  The period of time between the initiation of an overcurrent condition within a circuit and the initiation of interruptive action by the circuit protection device is termed the detection period.  The different types of protection devices detect overcurrents in different ways.  Thus, they can have different detection periods for the same overcurrent conditions.

The detection mechanism in a fuse is the melting and the vaporization of a fusible link.  In a thermal breaker, dissimilar metals, bonded together along a single surface, expand differently under the direct or indirect resistive heating of the overcurrent.  This forces a lateral mechanical movement, perpendicular to the bonded surface, which releases a latched contact separation mechanism.  In some types of thermal breakers, the contact mechanism can be formed using the bi-metal material itself.  In these devices, the bi-metal arms/contacts snap open when they absorb sufficient energy from the circuit overcurrent.  Another form of thermal breaker utilizes the longitudinal expansion of a hot wire, which carries the overcurrent, to release a contact latch.

The detection portion of a magnetic breaker is comprised of an electromagnet driven by the circuit current.  An overcurrent will develop, within the electromagnet, enough magnetic pull to trip a spring restrained latch which, as in the thermal breaker, allows the spring loaded contacts to separate.

A solid-state switch detects overcurrents electronically, in many cases by simply monitoring the voltage drop across a low value resistance which carries the circuit current.

Obviously, the faster a protection device can detect an overcurrent, the shorter the detection period.  But, in the majority of cases, the fastest possible detection speed is not desirable.  The speed of detection must be controllable and inversely matched to the severity of the overcurrent.

Series-connected protection devices must be coordinated.  For a given level of overcurrent, the device nearest to, and upstream from, the cause of the overcurrent must have the fastest response.  Devices which are further upstream must have a delayed response, such that the minimum circuit removal principle is adhered to.  When we speak of response, we are referring to the total response time, or total clearing time, of the interruption device, from the time of the overcurrent initiation to the final current-zero at which interruption is completed.  Since it is far easier to engineer the extent of the detection period for a given level of overcurrent than it is to control the extent of the actual current interruption process, the total response time of any protection device is, by design, determined principally by the size of, and the time required to detect, the overcurrent state. 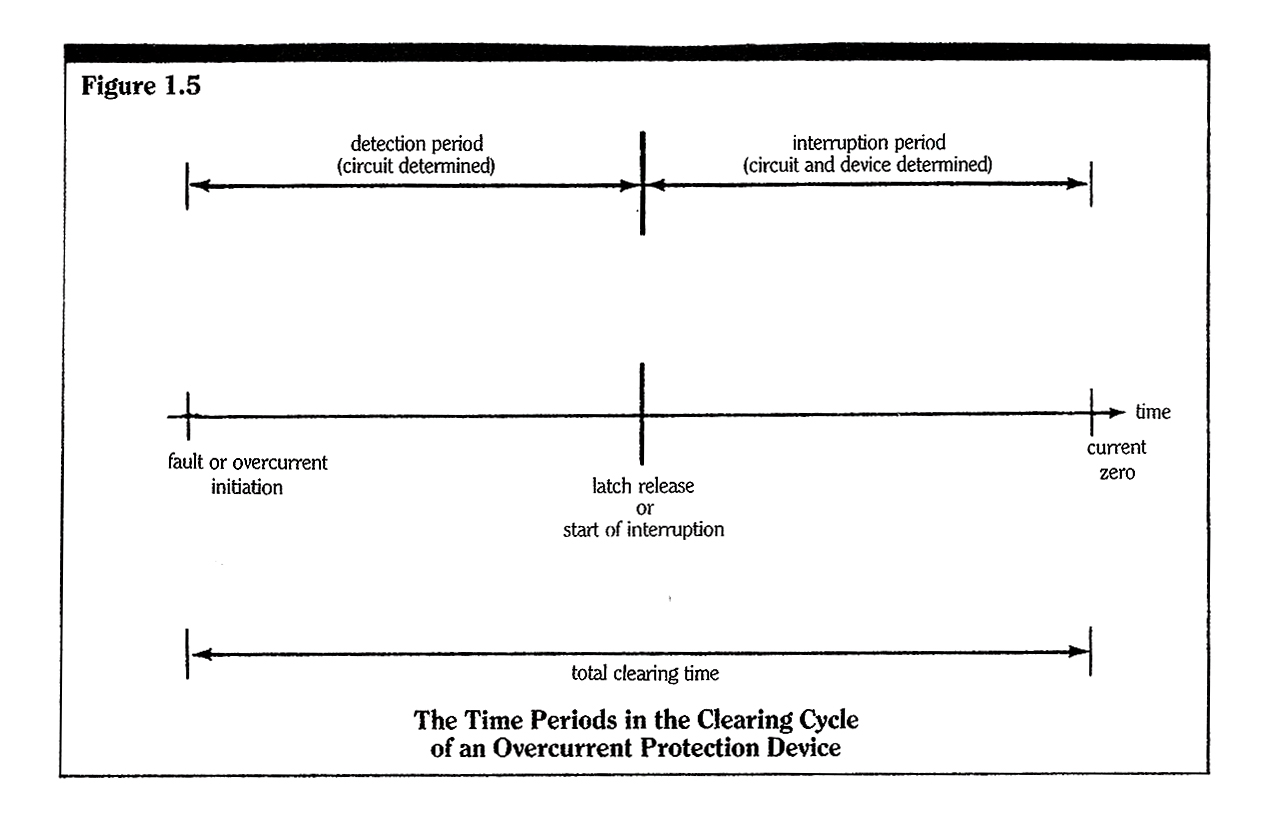 In contrast to the detection period, the interruption period cannot be engineered to decrease the intensity of an overcurrent increases.  The interruption period is, however, almost always designed to be as short as possible, since during this period the protection device is absorbing energy, due to the overcurrent flowing through the voltage drop across the contacts (or terminals in the case of a solid-state device).  If protection devices, other than fuses, do not clear the overcurrents fast enough during this period, they can be destroyed due to their own power dissipation.  Of course, fuses by design are always destroyed when they interrupt a circuit.

In AC circuits, the interruption period will last to either the first forced current-zero or the first natural current-zero at which the switching medium (arc or solid-state material) can reach its non-conducting blocking state.  In DC circuits, the current-zero state is always a result of a forcing action by the interrupting device.
There are additional time periods of interest during the current interruption process, such as contact travel time, arc restrike voltage transient time, thermal recovery time, and charge storage time (for solid state devices).