The theory of snap-action bi-metal elements is a special application of the more general theory of elastic stability of flexible structures.  In 1744, in one of the first mathematical discussions of the theory of elastic stability, Euler showed that column structures under axial compressive loading were subject to failure by lateral buckling at certain critical values of the axial load.  In essence, this same theory applies to snap bi-metal elements. 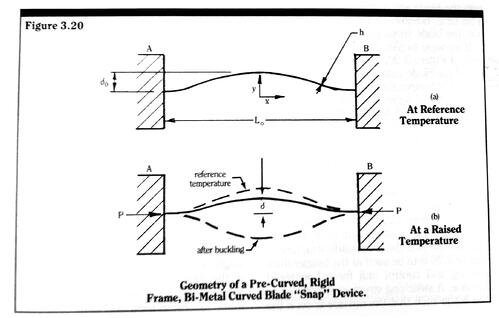 This pre-curved blade has thickness h, width b, and a slight reference temperature upward curvature, such that the mid-span y-axis deflection at reference temperature is ό0.  The blade is held firm at ends by rigid frame members A and B, restricting any x-axis elongation.  If the higher expansion side of the bi-metal blade is on the inside of the pre-curve, the blade mid-span deflection ό will tend to diminish as the blade temperature is raised due to the bimetal bending movement.  As the blade’s curvature diminishes as the blade’s temperature is raised, there will develop with the blade a longitudinal compressive force P, since the rigid frame will not allow any extension in its x-axis separation distance L0.   If the pre-curvature is large enough, and the temperature is raised high enough, the blade compressive force P will reach the Euler critical value and the blade will suddenly buckle downward in an attempt to relieve the force, and reach a new post-buckling locus, shown by the dotted line in Figure 3.20b.  This sudden buckling action is the snap we refer to when we describe a bi-metal element as a snap element.

If we were to plot, for the buckling structure of Figure 3.20, the midspan deflection ό and the blade compressive force P versus the blade temperature rise ΔT, while being careful to observe the direction of ΔT change, we would find that the plots would be similar to those shown in Figure 3.21 (a) and (b).

The direction arrows on the ό and P trajectories indicate the direction of ΔT travel.  The loops in the ό and P curves are referred to as hysteresis loops and are commonly found in “thermostat” devices.

The hysteresis characteristics, like those shown in Figure 3.21, are ideal for an on/off or “bang-bang” control system.  For example, assume that the snap blade structure of Figure 3.20 is to be used as the temperature sensing and control unit for a household furnace.  A switching structure is coupled to the blade such that the furnace is on if the blade is curved upward, and off if the blade has buckled and is curved downward.  It should be clear that the temperature rise at the thermostat location will then oscillate between the buckling rise ΔTB and the reverse buckling rise ΔTRB, and will have an average value of ΔTc – the temperature rise at the center of the hysteresis curve.  The thermostat designer has the job of making the average temperature rise ΔTc adjustable, and the hysteresis temperature width ΔTB-ΔTRB a reasonable value.  Shortly, we shall see how these goals are accomplished.

First, let us reconsider the structure of Figure 3.20.  This structure buckles because it can develop enough longitudinal compressive force P.  Are there other structures, or variations of this structure, which can also allow build up of compressive force to the Euler critical value in a bi-metal element?  The answer, of course, is yes. 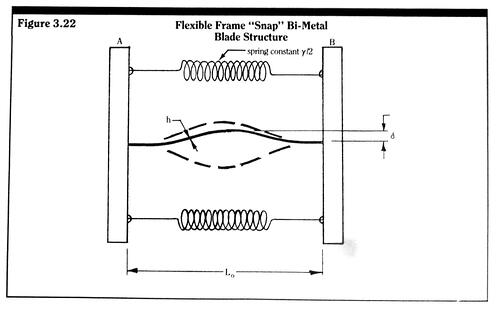 This assembly differs from the fully rigid structure of Figure 3.20 only in the degree of rigidity in which frame members A and B are held at separation distance Lo.  In the flexible frame, any incremental increase in frame separation ΔL from the original length Lo incurs a spring retention force ϒΔL, where ϒ is the effective spring constant of the frame.  This retention force is then the bi-metal blade longitudinal compressive force.

The compression force P for the blade, including the frame extension ΔL, is now given by

Note that the frame flexibility factor, which we will give the symbol q, is always less than or equal to unity.  It is equal to unity for a fully rigid frame.  Thus, if the frame is not too flexible, there is no basic difference between operation of a fully rigid frame and a flexible frame blade buckling structure.  Though, for an equal change in blade arc length with temperature rise, the flexible frame compressive force P will not be as great as that for a rigid frame. 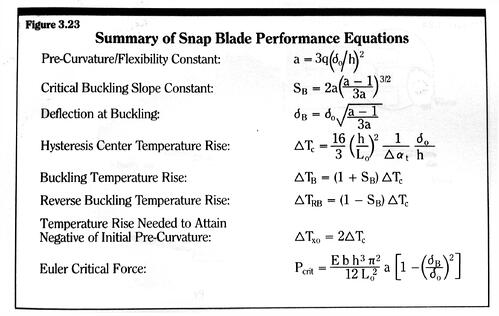 Now, using the material parameters given in Table 3.1, and the equations given in Figure3.23,

So, that the reference temperature mid-span deflection, due to pre-curvature, must be

Note that once the choice of material and the reference temperature frame separation has been made, the hysteresis center temperature depends solely on the amount of pre-curvature.  Now, since

so that the required frame flexibility factor is

If the frame in the above example was rigid rather than flexible, the hysteresis width temperature difference could not be pre-specified.  Once the required pre-curvature deflection όo has been determined for a rigid frame, we would have an unrealistic result, since the value of Δαt is certainly not valid over such a temperature range.

For a rigid frame, if one wishes to pre-specify both ΔTc and ΔTB – ΔTRB, the reference temperature frame separation Lo must also become a variable.  If we stick to specified hysteresis temperature width and hysteresis center temperature, we must have SB = 0.5.  And thus, a = 2.67.  We would then have to have

The frame separation can then be solved for as

There are several practical implementations of the bi-metal snap structure.  They all differ in the manner in which the blade longitudinal force P is formed.  They all operate, however, by principles similar to those we have developed for the simple compressive frame structure of Figure 3.22.

The circular disk structure in Figure 3.24 was, perhaps, the first snap bi-metal device.

A snap disk supplies its own longitudinal compressive force P due to its circular symmetric structure.  Any lateral deflection in that disk face increases or decreases circumferential tension.  This circumferential force results in a radially directed force, which can induce lateral buckling, just as in the simple blade structure.  A complete analysis of the stability of an isolated bi-metal disk structure has been given by Wittrick et. al.  This theory however, can only be approximately applied to practical disk structures, since real devices support the disk by an arm or frame.  This support destroys the circular symmetry and invalidates the solutions of Wittrick et.al.  Most practical disk devices are designed using the empirical method (i.e. “cut, try and remember”).

The Valverde thermostat structure is a flexible frame blade device which supplies its own longitudinal compressive force P by means of an ingenuous crimped outer frame.  As shown in Figure 3.25, the bi-metal blade is composed of three parallel sub-blades, joined at the ends. 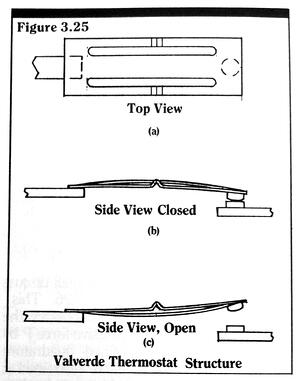 The structure can easily be formed from a single blade by punching two longitudinal slits, symmetric about the central sub-blade (see Figure 3.25a).  A length shortening crimp is made in the outer two sub-blades which pre-curves the center sub-blade and forms the compressive frame.  Since the structure supplies its own compressive frame, it need only be supported at one end, enabling the entire device to act as a snapping contact arm (see Figure 3.25c).   Any decrease in the center blade deflection, due to bi-metallic thermo-action, increases the longitudinal compression of the center blade.  At a sufficient level of center blade compression, the entire structure snaps to position of opposite curvature.  Since the crimped outer blades also experience lateral thermo-deflection, device analysis for this structure is somewhat more complicated than that for the simple, single blade, compressive frame structure of Figure 3.22.

The final snap structure we shall discuss is the Taylor blade, Figure 3.26. 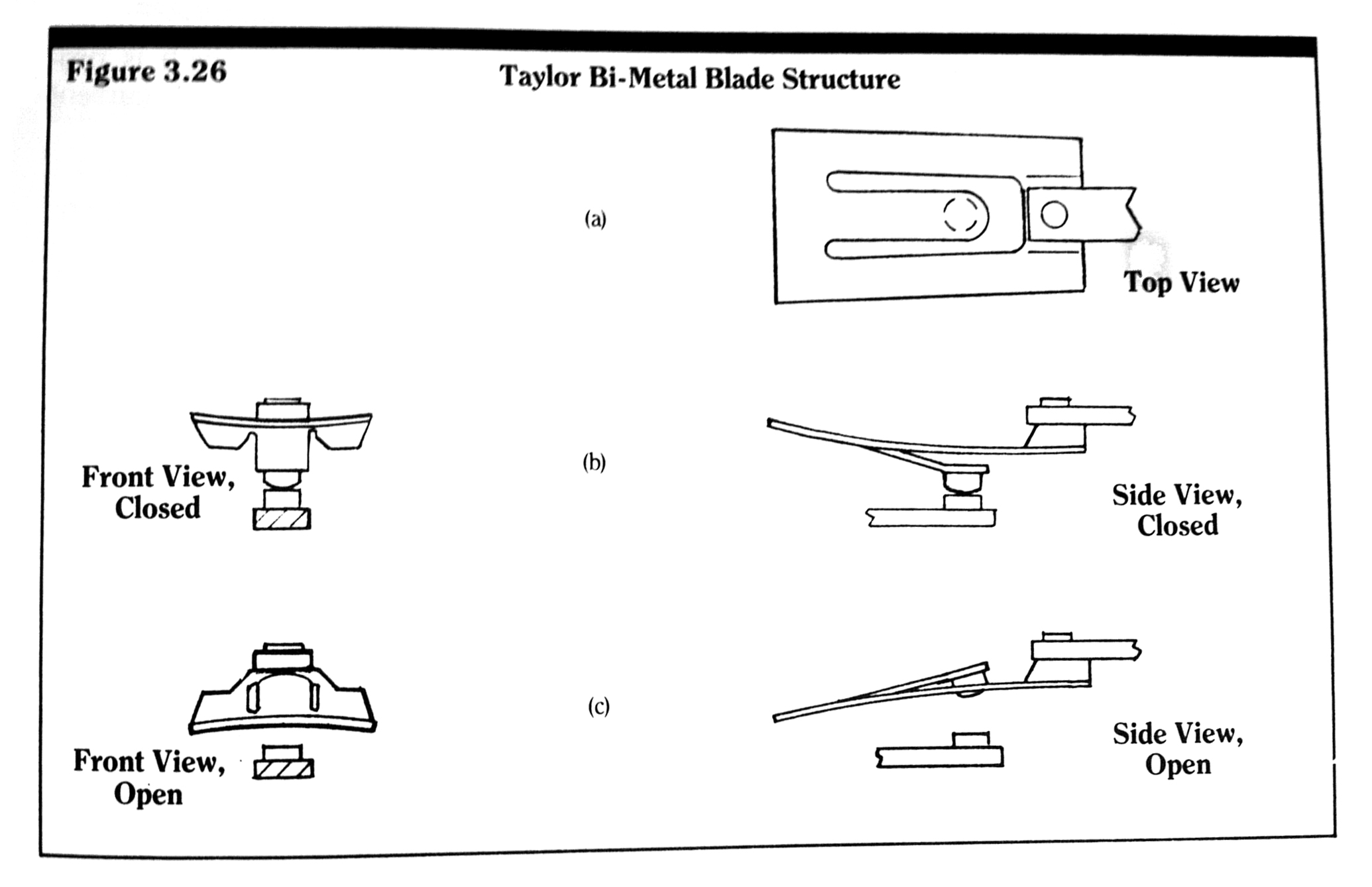 This device, like the snap disc, develops the needed longitudinal compressive force P by means of blade self-confined quadrature forces.  The structure is held or restrained at one end only.  The free end is pre-curved, in a direction perpendicular to the blade length, such that the center blade – the contact blade – pushes a stationary fixed contact with a positive contact make force.  As the blade temperature is raised, the bi-metallic thermo-deflection increases this contact force.  Compressive buckling force in the longitudinal direction (longitudinal to the blade pre-curvature, but perpendicular to the blade length) is supplied by the blade itself.  Much like the disk structure, any decrease in lateral deflection at the free end is countered by restraint due to the anchored outer legs.  At the critical, or buckling temperature, the free end snaps to an upwardly curved position (See Figure 3.26c), and the center contact blade rapidly moves away from the fixed center contact.

The Valverde and the Taylor blade structure discussed above are near ideal overcurrent switching structures, since the contact mechanical “make” force increases as the operating or switching temperature is approached.  This characteristic is quite important since the making force is countered by an electromagnetic breaking force, which is proportional to the square of the current through the device contacts.